Mac Platform: Intel
OS version: 10.7
Processor type(s) & speed: Intel Core Duo 2GHz+
RAM minimum: 1 Gb
Video RAM:
DRM-free GOG version
Prehistorik 2 is a sequel to the platform game Prehistorik. It was developed by Titus Interactive for DOS and Amstrad CPC in 1993. Like in its predecessor, the main character of Prehistorik 2 is a caveman who goes in quest for food, fighting various animals and humorous end of level bosses.
The game is a simple platform game where the player walks and jumps his/her way through the levels and whacks enemies in the head with a club. Points can be collected by both whacking enemies and collecting items (including food, diamonds, video games, etc.). The levels contain hidden food items which can be discovered by hitting the right spots with the club.
The creators added a lot of detail to the game, which indeed increases the entertainment factor. If the player runs for a long distance and then stops, the caveman will be out of breath.
Controlling the game is very simple, with only the four arrow keys for movement and the space bar as attack button.
Instead of having to collect at least the right amount of food to be able to reach the next level as in Prehistorik, in Prehistorik 2 it is only required to get a lighter before the player can go to the next level. All in all, there are ten levels plus three bonus levels.
There are various hidden secrets in this game, one shows some extra credits, and there’s even a collection of holiday photographs of the development team.
System Requirements
Linux: OS X 10.7.0 or later
Processor: Intel Core Duo 2GHz+
Memory: 1 GB RAM
Graphics: 64MB of video memory
More info
https://www.gog.com/game/prehistorik_12 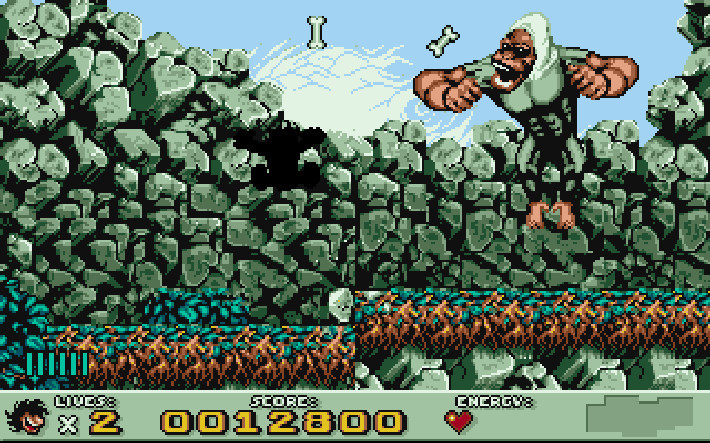