– Criminally Insane inmates or associated prisoner traits will no longer spawn if the “Psych Ward: Warden’s Edition” Expansion is not installed.
– Female prisoners with babies should no longer become criminally insane. This is also fixed in existing savegames.
– Players can cancel cloned rooms and get a refund for the item(s) canceled depending on the progress.
– Fixed prisoners’ hands and some carried items being displayed incorrectly when crossing bridges.
– Fixed some crashing issues.
– Fixed localization errors.
– Fixed benches incorrectly attaching to walls and breaking alignment with tables.
– Fixed an issue with some rotations of Guard Pavilion (Corner).
– Fixed the prisoner count being displayed incorrectly in Reports.
– Fixed room quality stating some prisoners deserve higher Cell quality than 10.
– Fixed prisoners not always being assigned a cell in sectors other than shared ones.
– Fixed issues with the game being forced into a windowed state after loading a savegame on Mac OSX.
– Fixed the “Prison Danger” statistic calculation including dead prisoners.
– Fixed an issue where Criminally Insane Inmates were being unintentionally blocked from Chapel and Canteen rooms, even when said areas were flagged as “Insane Only” zones in Deployment.
– Fixed an issue where the planning aspects of the “Conviction” campaign story were not compatible with the new Planning Mode features.
– Added ability for Modders: You can now turn off shadows using “SpecialRestriction NoShadow”.
Known Issues:
– MAC/Linux: Changing the language during gameplay can lead to all objects turning into black squares. Restarting your game will fix this issue.
– MAC: There is a chance that the plot options “Snowbound Plot”, “Jungle Plot”, “Desert Plot” and “Lunar Plot” will not get applied when starting a new game
Build and manage a Maximum Security Prison. As the sun casts it’s early morning rays on a beautiful patch of countryside the clock starts ticking. You’ve got to crack on and build a holding cell to detain the job­ lot of maximum security prisoners that are trundling to your future prison on their yellow bus.
As your workmen lay the last brick you don’t have a moment to let them rest as they need to get started on the first proper cell block so you can make room for the next prisoner intake. Once they’ve all got a place to lay their weary heads the fun can really start. You’ll need a canteen, infirmary and a guard room, oh, and don’t forget to plumb in a toilet, or things will get messy, but what about a workout area? Or solitary confinement cells? Or an execution chamber?
Inspired by Dungeon Keeper, Dwarf Fortress and Theme Hospital and with over 1 million players having spent time inside, Prison Architect is the world’s best lock-­em-­up.
More Info: https://www.introversion.co.uk/prisonarchitect/pc.html 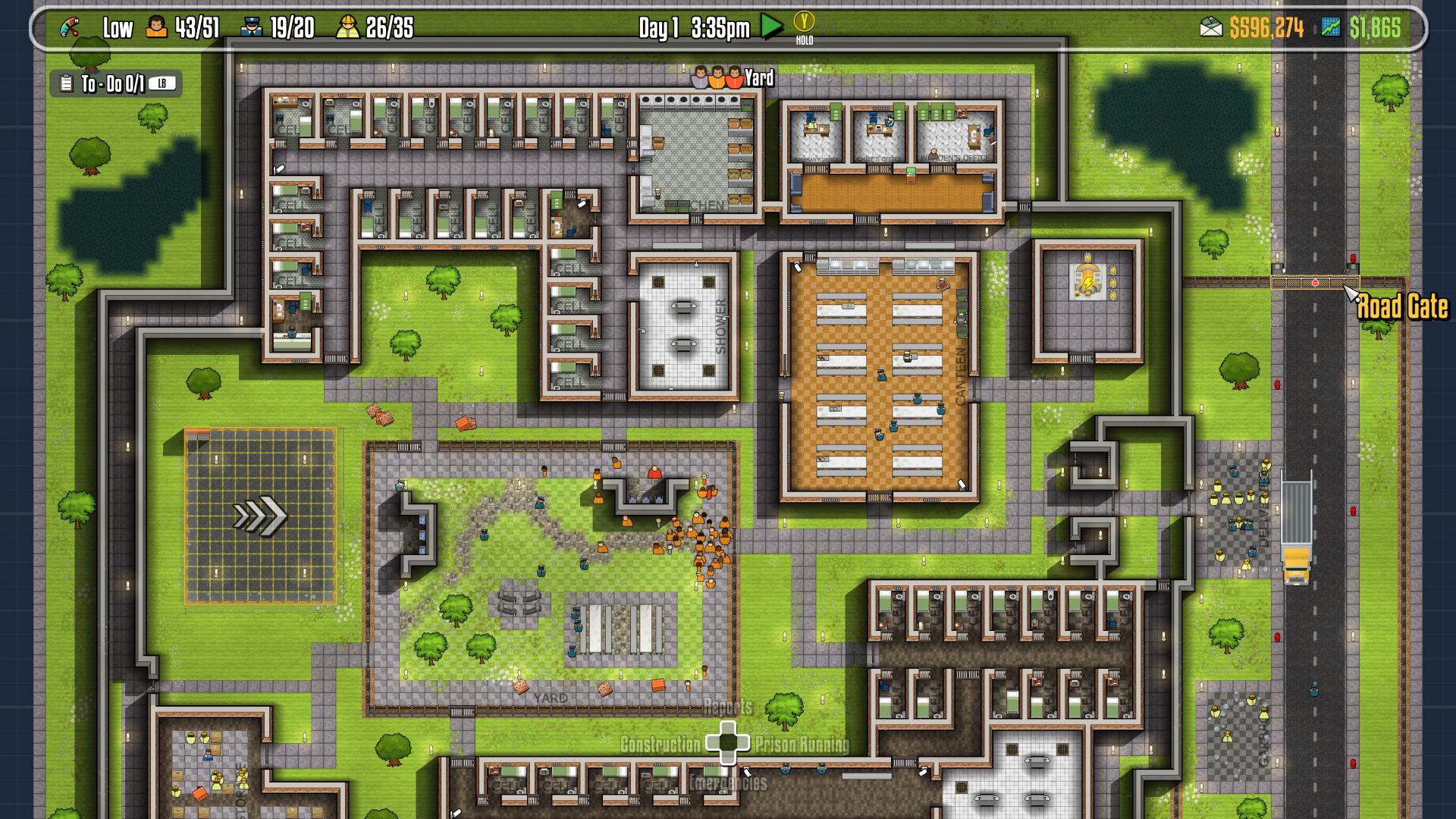