Toontrack Superior Drummer 3.1.7 In addition to a massive library of raw sound material, Superior Drummer 3 introduces a unique design*, a streamlined workflow and countless features for powerful drum production in your computer. With Superior Drummer 3, you have control and creative power beyond the imaginable. Welcome to the future.
FEATURES – AT A GLANCE.
In excess of 230 GB of raw, unprocessed sounds in 44.1 kHz/24 bit
Recorded with an additional eleven separate room microphones set up in a surround configuration for a complete immersive experience
Playback in stereo or up to 11-channel surround systems
Approx. 350 vintage and classic drum machine sounds
New and improved scalable interface with detachable windows
Edit Play Style, Tap2Find, Song Creator and Song Track features as well as improved workflow and search functionality
Built-in MIDI grid editor
DAW automation for built-in macro controls
Support for keyboard shortcuts
Release notes
Release notes for Superior Drummer 3.1.7
2020-02-24
Superior Drummer 3.1.7 is now available to download using the Product Manager or from the ‘My Products’ area in your Toontrack account. Please note that version 3.1.7 is required for the support of Superior Drummer 3 products released from this point forward (Q1 2020).
Changes
General
Added support for SDXs consisting of several sub-libraries even though installed as one.
Bug Fixes
The reported latency was too small when a sample rate other than 44100 Hz was used.
Fixed a sound glitch that could occur if a host requested less than 16 samples.
Drums Tab
It no longer crashes on Mac if you ctrl-click a stack pad and select a different sound from the context menu.
Grooves Tab
Changing position in a browser groove being played in original tempo caused the looping to jump back to the wrong position.
During browser playback with “Preview in Original Tempo” active, mixer effects that sync to tempo now use the correct tempo.
Fixed a possible crash when user MIDI was synchronized/added.
On Mac, the browser should no longer sometimes stay dimmed out when MIDI is dragged out from the window.
Grid Editor
Fixed a potential crash when Randomize was used.
Song Track
The undo system can now handle more than 128 song blocks.
Exporting audio using “Bounce Microphone Channels” would in certain cases (involving having instrument stacks) result in incomplete exports.
Homepage https://www.toontrack.com/product/superior-drummer-3 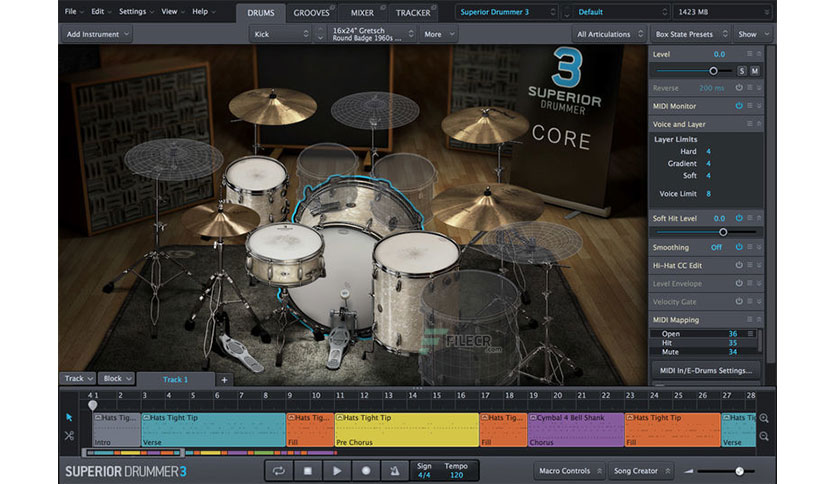